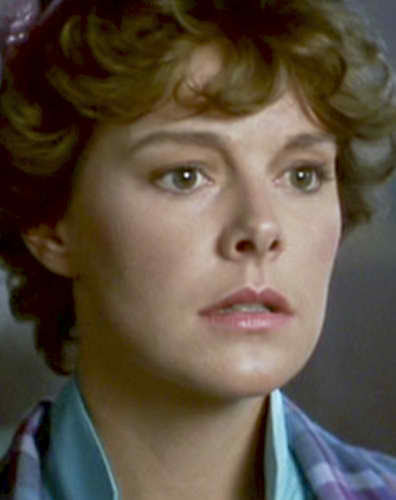 
Amanda Bearse in Fright Night is pretty close to the Connie McNamara I knew 1981 - 1983, except that Connie has prettier eyes. We worked the same IUP campus job about, what, 10 to 15 hours a week? And she was nice to me. Obviously this was pure torture for me...I got to look at that everyday. Might be a reason why I started crying...withdrawal.
ITEM: Still figuring out if I should spill the deep dark secrets of my past friend Connie McNamara. (Don't know if Connie still considers me a friend or considers me at all. I would bet good money on the latter. Not that I care about it. I might be lying about that last thing I said.) It should also be pointed out, since I'm stupid and I hadn't considered that some people might think this is recent, that all this 1 in 7 billion stuff happened about 30 years ago from 1981 and 1983 on IUP's campus. Hey, its one of the advantages of being old and knowing about the Before Time when the info I've been able to get about Connie within an hour (Is she updating her linked in page and why..) would have taken a team of reporters weeks to do in the 80s. I'm thinking about writing a long several thousand word piece on it and seeing how and if it might sell via the Kindle. Would be fun to find out and I'm trying to build a library.
Actually it would be very positive stuff. Here's something I wrote already for this longer essay I had in mind.
This would be the beginning:

"In fact, Connie McNamara is probably the coolest woman I’ve ever known and with the benefit of 30 years of hindsight probably the best friend I’ve ever had."

This would be the end.

"Some of the best and kindest moments of my life were spent with Connie McNamara ."
Just add several thousand words in between
.
But its not going to all be that nice. It can't be. Nobody's that saintly. For example when Connie McNamara looks into the camera with Anderson Cooper and talks about those impulsive kids who don't  choose abstinence might interact with this HIV kid well...I know for a fact that she was one of those non abstinent impulsive kids...how do I know this? I've seen the serene Afterglow too many times up close and personal.(Not the only evidence I have by the way...) No it wasn't me we never even held hands. It's complicated. And Connie has three little girls now. Maybe she wants to lie to them like any good parent. I don't know.*

Plus I've suppressed these memories because they're painful. I'm crying again. I don't cry over stuff. Attacked by two 100 pound rottweilers in this neighborhood. Didn't cry. Threatened by the Klan, personally. Didn't cry. Probably cried 10 times since 1984. Seven of those times can be attributed to Connie McNamara...so I might wimp out. But I'm running out of time. I know this could be a really good essay. I might even be able to shop this...So...I'll work on another freelance assignment for another few days and come back to this...


*If terrifying people in the 717 vicinity who resemble Amanda Bearse are troubled by anything that I've written on this post send me an email and I'll remove it. My email is pshropshire@yahoo.com. You must do this within  a week that its posted.
Posted by Philip Shropshire at 7:18 AM