One of the more horrible arguments made by "Bern or Busters" is that the courts don't matter. Well here's one of the new appointees from President Trump: Judge Peter Phipps. While technically he's not a member of the Federalist Society, people who are notoriously quiet on Brown v. Board of Education, Judge Peter Phipps might as well be. Both me and Justin used to work for Fieldworks. We're both suing the organization in the US federal courts over racial discrimination. Fieldworks claimed they fired Justin over "duplicate registrations", which they have yet to produce at any level. That's odd because we took photographs of all of our voter registrations so if they had evidence you would think they would have produced it. While Phipps has ruled in Justin's favor a few times most of the time he has made it impossible for him to win his case, mainly by the fact that Justin's motion for extension was granted, and then mysteriously cancelled. Luckily we have the judge's original order in writing that Judge Phipps conveniently forgot about. In fact, Phipps is running a clinic on how to kill a pro se complaint by moving the case entirely too fast and not granting common sense motions like an extension for discovery.

Yes Justin is interested in any pro bono legal help he can get.

Complete copy of what Justin sent to the Federal Courts.

Plaintiff's Show of Cause or is it a fair choice if the court makes me choose between my job/livelihood and a completely arbitrary court date?

1. Introduction.
By the way, the answer posed by the title here is "no".  Also, and let me be blunt, I no longer believe or think that Judge Peter Phipps is an honest and objective judge, at least for plaintiffs in a civil rights case. He was appointed by President Trump, famous for characterizing neo nazis and old fashioned Klansmen as fine people, and known for being an overall racist and a general loon. (He still won't apologize to the exonerated Central Park Five even though they were cleared by DNA evidence and a confession by the real rapist.) And at times I feel that Judge Phipps has given me that same kind of "very fine" justice. He does no case analysis whatsoever (Shocking for a Stanford man..). He just rules yay or no in, and here's a new word I learned, "threadbare" briefs and sometimes just quotes the opposition attorneys pretty much word for word. For example, if an appeals court ever looks at this, and I'll probably ask them, how did I lose on the question of specific jurisdiction? How did he determine that I didn't prove that conclusively? Good luck finding it. That's what I would expect from a biased right wing judge who hates these kinds of lawsuits.
2. Court and Other Side Told Several Days Before Trial of My Unavailability.
So I suppose a judge with the gall to force me to give up my job for a completely arbitrary court date wants to fine me as well. Two quick arguments: One you're not supposed to fine IFP plaintiffs. Or as it states multiple times in the circuit:
Shilala v. SCI Albion, et al., 2012 U.S. Dist. LEXIS 95887, *7 (W.D. Pa. 2012) ("Alternative sanctions, such as monetary penalties, are inappropriate with indigent parties.").

And of course I would argue that I don't deserve any sanctions.
Or two: As soon as I found out on Thursday what my schedule would be (See exhibit one.) I told the court to reschedule. You had a full three days to cancel and reschedule. Please don't try to pin the costs on me. I gave you plenty of time to make other arrangements. You had three days. Take some responsibility for your own actions.

2. The Trial Would Have Been A Sham
Even if I had made the "right" choice and lost my job over a completely arbitrary court date, the trial wouldn't have been worth attending. Neither side had enough time to do discovery. The discovery period shouldn't have started until the summary judgment decisions were finalized. This is why the court cancelled the defendant's subpoenas to depose because they weren't timely, unless the court has changed its mind again to help the defendants. Who knows.
The court also seems to be forgetting something in its own statement. Here it is again (Document 101).
On , this Court entered a second pretrial order at ECF No. 67. Therein, a jury trial in this matter was scheduled for today, . The trial schedule was further discussed during a telephone status conference on May 21, 2019 and a pretrial conference on May 31, 2019. On , Plaintiff filed a motion to stay that was denied the same day, re-establishing for the record that a jury trial in this matter was scheduled to begin today, . ECF No. 96. In spite of the well-established trial date in this matter, Plaintiff failed to appear.

The court conveniently forgets its own May 21st (Document 81) order where it promised this.
Subpoena Handed to a Person at My House and Not Me and Motion to Extend the Discovery by 60 Days, ECF No. 72, are granted. The appropriate order will follow.

So common sense would suggest that I didn't have to prepare for a trial on June 10. A fair judge, even if he meant something other than the plain reading of the words (A reasonable person could conclude that the motion for the extension was granted. Unless the court wanted Discovery to extend beyond a jury verdict.) would have chosen to honor the extension and cancel all post discovery motions (like motions in limine) until discovery was completed. Just out of a sense of fairness and to avoid prejudice. But not our Phipps.
3. Poulis Factors Exonerate Me.
I don't write this for the judge. I no longer think he's objective. I think Phipps is a federalist society hack. He certainly doesn't deserve a promotion to the appeals court. He doesn't even deserve to be on the bench. I write this for the appeals court.
Here's a list of the Poulis Factors from Hildebrand vs. :

(1) the extent of the party’s personal responsibility; (2) the prejudice to the adversary caused by the failure to meet scheduling orders and respond to discovery; (3) a history of dilatoriness; (4) whether the conduct of the party or the attorney was willful or in bad faith; (5) the effectiveness of sanctions other than dismissal, which entails an analysis of alternative sanctions; and (6) the meritoriousness of the claim or defense.

I will answer these one at a time..
One (extent). I just started the job a month ago and unlike a federal lifetime court appointment I have to perform and can not take off three days whenever I want to do court things. At least not if I want to keep my job. I got my schedule Thursday. I told them Friday. I warned the court that this could happen and made many attempts to get extensions. (An appeals court can take a look at the minutes of our hearings. I made many objections.) Two (prejudice): The court date was completely arbitrary and needed to be set aside according to Judge Phipps own order granting the extension. The other side hadn't even completed discovery yet. 3. (dilatoriness). Not only do I have a habit of showing up, when I'm not working, but I've had to put statements back into the record that the court tried to illegally throw out, claiming wildy that there were certain Federal Rules of Civil Procedure that I wasn't allowed to use. I simply lacked the ability to be in two places at once for the trial. Also one incident of lateness wouldn't cut as it states in Burden v. Yate 1981: "missing one deadline as a result of a miscommunication--simply doesn't create a record of intentional delay." People who have been found wanting or in violation of the Poulis factors are people who have ignored their cases for several months to several years. I haven't done that and gave the court a three day warning that I would be unavailable for, quite frankly, a fraudulent trial. 4. (willful and bad faith). Am I at fault for the schedule given to me by my boss? Am I acting in bad faith when I immediately tell you about it the day after so that you can you cancel the date and save your money? I think not. 5. (sanctions). I don't believe sanctions are warranted. I'm not at fault. No one should have to choose between their job and an arbitrary court date, that should have never happened under the judge's own orders (see document 81). 6. (meritoriousness). I already beat a summary judgment motion which never should have been held before discovery started and ended! I was told when I was fired that I was guilty of duplicate registrations. These registrations have never been produced as evidence. If I ever got a full discovery period, not one where I had to concentrate on trying to keep the case from ending while attempting to do discovery while working or looking for work, then I'm sure I could learn whether this evidence exists or not. Judge Phipps has done everything possible, including ignoring one of his own orders, to make sure that I could never find out for sure. Judge Peter Phipps is really an active member of the defense, not a neutral or objective "judge".
4. Conclusion.
One of the most horrifying things Phipps has said is that he doesn't believe, because of a Supreme Court decision, in the right to discovery. Now I haven't read a lot of cases, but if that was the norm of the federal courts (And let me guess: rich people and corporations would get full discovery and poor people and minorities wouldn't, kind of like now.) the federal courts would turn into the People's Court. There can be no trials or real justice without real discovery. The extension I asked for was minor and should have been granted, and was. I'll let the appeals court do its job. One final note: any objective look at the 100 or so documents filed in this case, including my own statement of facts, should be ample proof that I have attempted to prosecute my own case. I would hope that would be clear. 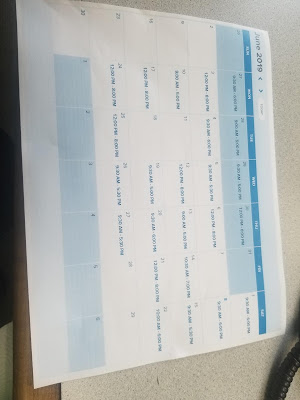 Update: Justin was wrong about saying that Phipps based his decision on no right to discovery on a Supreme Court decision. Apparently, that's just what Phipps thinks. Justin disputes that he was informed that the extension was cancelled. Only way to be sure though is to take a listen to the court audio, but Phipps statement definitely contradicts what was written on May 21st. Here's the court statements published by Phipps himself. 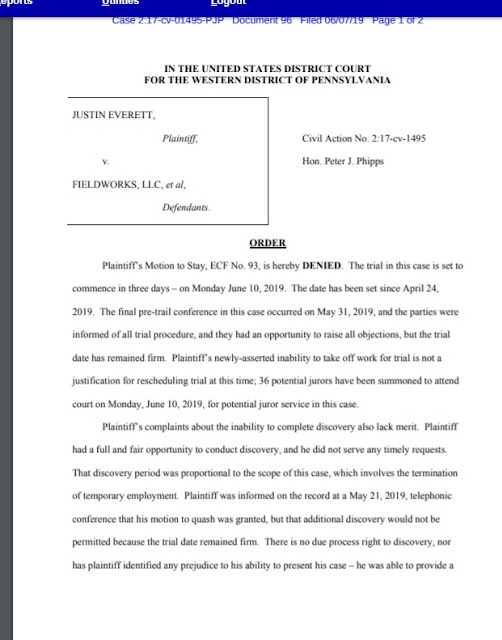 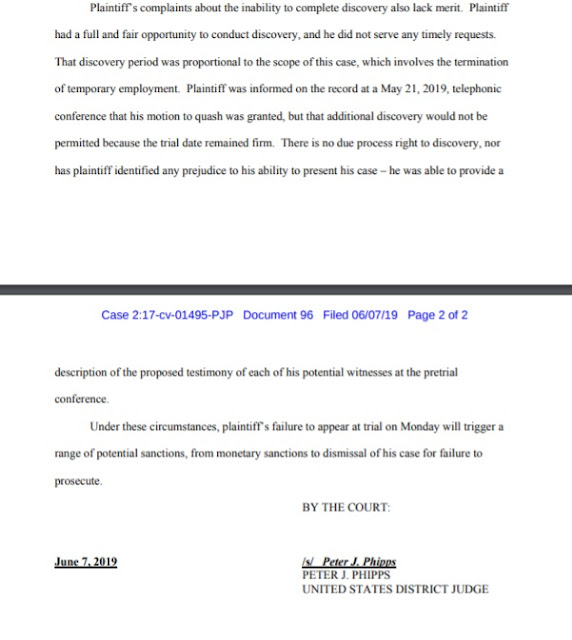 Posted by Philip Shropshire at 6:34 PM No comments: