Obama Vs. The GOP Vote Fixers and How To Steal Your Vote Back 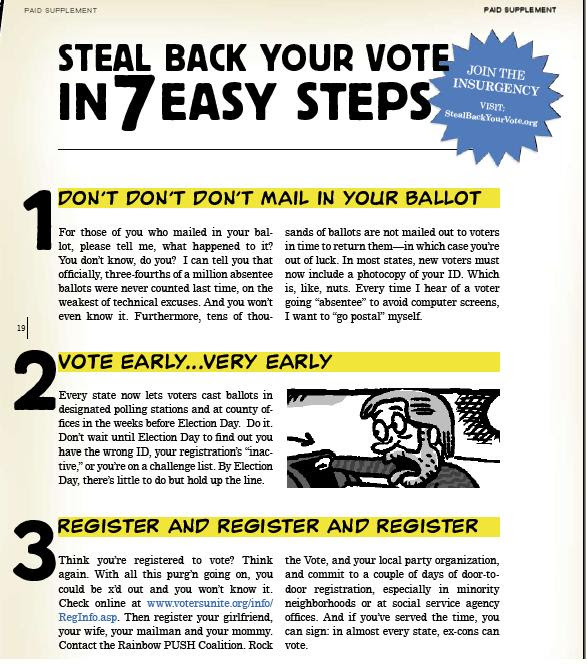 I haven't written in about a week but I have been thinking. Obama is way ahead in the polls. This would be a great thing had the Republicans not used every method in the book to steal the last two presidential elections. For example, several states that Obama is leading are all either run by Republican Secretary of States, most notably Michigan and Colorado, which brings us back to the Ken Blackwell/Katherine Harris scenarios. Obama is leading in Florida but as far as I can tell there's nothing that's been passed at the federal level that would prevent thousands of Democratic Party votes from being stolen, again. There is a bright spot in Ohio because they elected a progressive Secretary of State in Ohio. The Republicans are attempting to strip about 200000 voters from the Ohio registration list. I'm going to guess that they come from mostly DNC strongholds. However, as I've been watching and learning from various voter's rights group our very own Pennsylvania is very likely to be stolen because in most precincts there simply won't be a paper record. In fact, in arguably the most important precincts in Pittsburgh and Philadelphia--where Obama needs to roll up big majorities in order to beat the bible belt T that makes up the rest of the state--the machines leave no paper trail. Its not unlike going to the robber and asking him to be honest about robbing you. You won't be able to verify it. If we lose Pennsylvania, then let's make sure we thank Dan Onorato, Ed Rendell and the Philly machine.

I think that's why McCain thinks Pennsylvania is more promising. It's one of the easiest states in the nation to steal. Obama almost has to win by a landslide nationally in order to win at all. Of course, what do you say about a DNC that doesn't pass a single bill in the last two years in order to change the equation? They could have mandated paper trails and audits but they did nothing. I think you call them collaborators. Or people who like proxy wars on behalf of Israel. Or DLC members. Or clueless. Or all of the above.

Anyway, that's the sad state of affairs as far as I can tell.

Sounds depressing. But Greg Palast and great alt cartoonists Ted Rall and Lloyd Dangle have written a 24 page comic telling you how to fight back. You can download the comic as a pdf file for a donation as small as a dollar. That's what I did. Palast, arguably one of the best journalists in the United States (Who, of course, you can only find online for the most part and who doesn't work for an American newspaper. Sigh.) needs the funding so that he can continue to do cutting edge reporting. You can find his seven instructions both above and below this post. 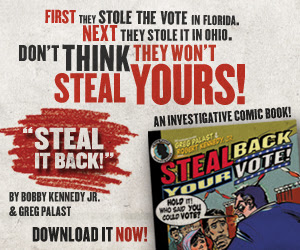 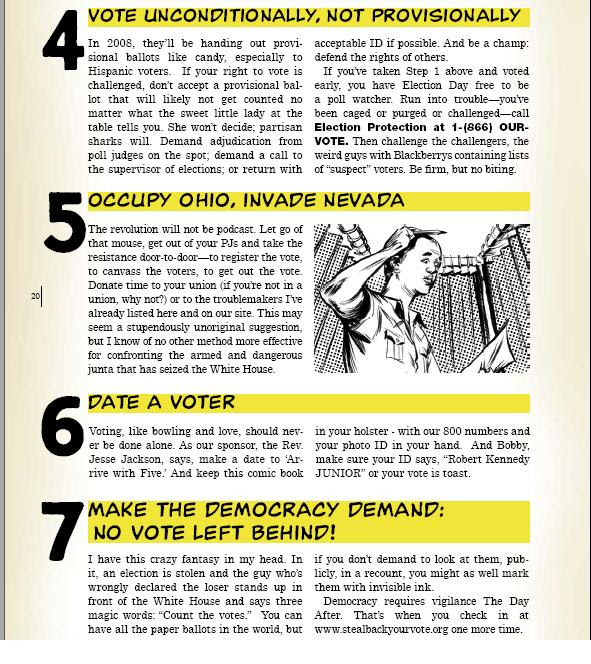 Posted by Philip Shropshire at 1:15 AM No comments: