ITEM: This is my new and slightly more intimidating Facebook icon. More intimidating than "Franklin" from Peanuts anywayz. "Count on it Overseer...!" Related: New site, for me anyway, from a guy who also used to shop at Copacetic and Eide's comics in the 70s and 80s apparently. More Related: With "Sabre" the writer wanted to create a superhero who looked like Jimi Hendrix. You be the judge. 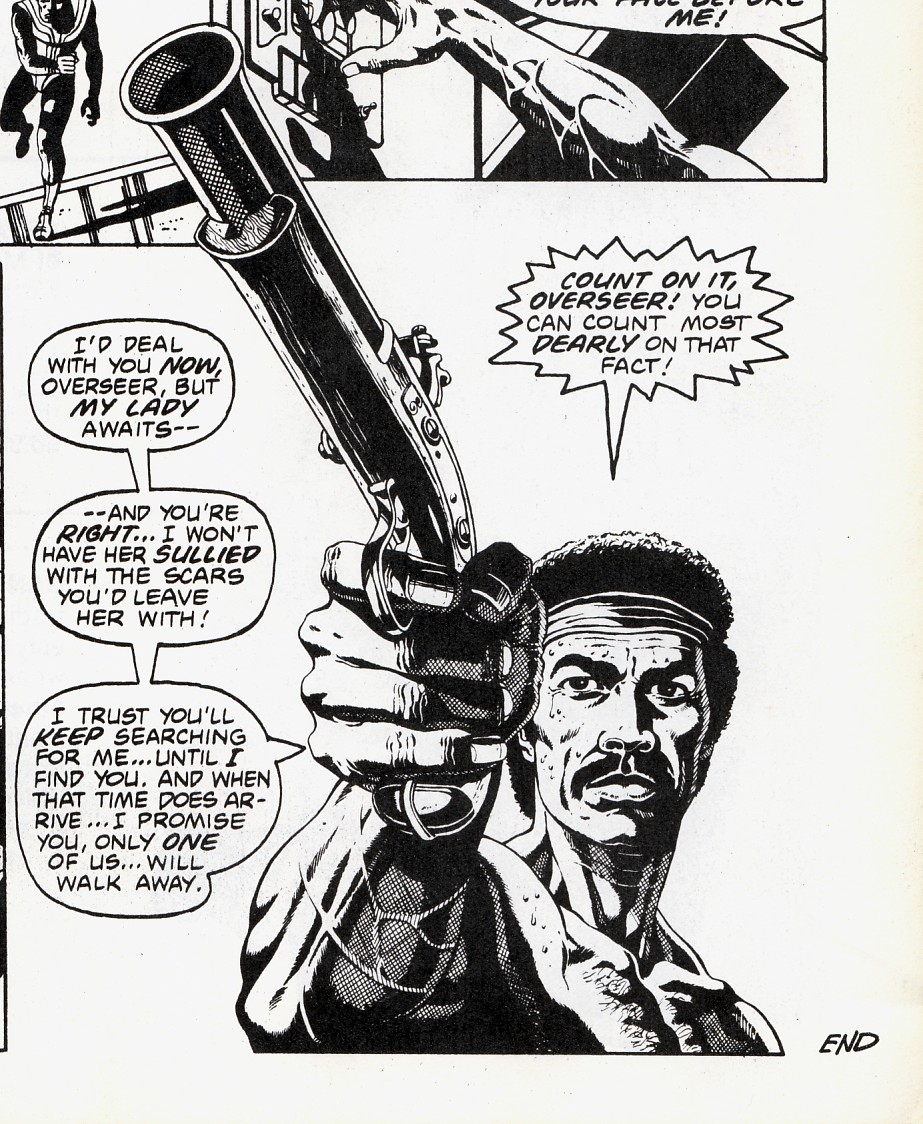 Posted by Philip Shropshire at 9:30 AM 0 comments

I hightly recommend the work of The Thinking Atheist this Holiday Season.

ITEM: I highly recommend all of the videos produced by the Thinking Atheist. These are professionally made and would appear on your tv if this was the sort of thing that was allowed on your television.

Posted by Philip Shropshire at 9:00 AM 0 comments

Message from the Past to Appear in the Future!

This is a test message from...the Past! Which will appear in the...Future! I loves the Internets....
Posted by Philip Shropshire at 5:40 AM 0 comments

What's wrong with the Daily Kos and Barack Obama in one low rez toon...

You might say why are progressives upset with Barack Obama besides the fact that I haven't won on a single solitary issue. We don't even get appointments. Well this handy dandy cartoon should explain it for you.

My predictions for Dexter. 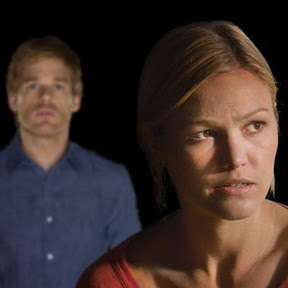 Sigh. I wish I had a hawt woman partner like Julia Stiles to kill all the "bad people" with. Predictions: I think somebody in the department finds out what Dexter has been up to this season. My bet is that Quinn finds out and keeps quiet in order not to hurt Dexter's sister. Dexter needs someone like Quinn, somewhat competent in his extincts but corrupt enough not to mind the killing of killers outside of procedure. Plus, it gives him an inside cop to work with. He'd finally have a commissioner Gordon to work with. There's an outside shot that the sister finds out but what would she do? Wild Prediction: Everybody in the precinct already knows that Dexter is a serial killer because he's given everybody a reason to know. Everybody except Dexter's sister. And they go along with it in order to get things done. Related: I hope Julia Stiles sticks around. She would be a perfect wife who understands the important work that Dexter is doing.
Posted by Philip Shropshire at 8:38 PM 0 comments

Jesus and Mo takes on the founder of the Mormon Church 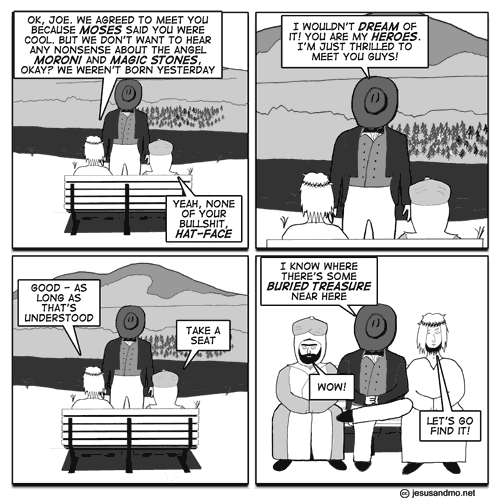 Item: Yet another Jesus and Mo' toon about the founder of the Mormons or the Church of Latter Day Saints. Related: Comedian David Cross refers to Mormonism as the Scientology of its day. One of the reasons why Mitt Romney lost the GOP nomination for president is that the Republican base just couldn't buy his religion. And while I very seldom agree with the GOP's retrograde base about anything I see their point here. Mormonism would seem to suggest a radically different conception of Christianity and the fact that the founder of the religion was a thrice convicted fraudster tells you that this was made up. Mormonism is kind of a hustle, just like all religion. More Related: Mitt Romney's failed presidential run is why you're seeing these PR "I'm a Mormon" ads. Related to More Related: There is an "I'm an Ex Mormon campaign" at Youtube as well.

Earlier Jesus and Mo strip that I wrote about: 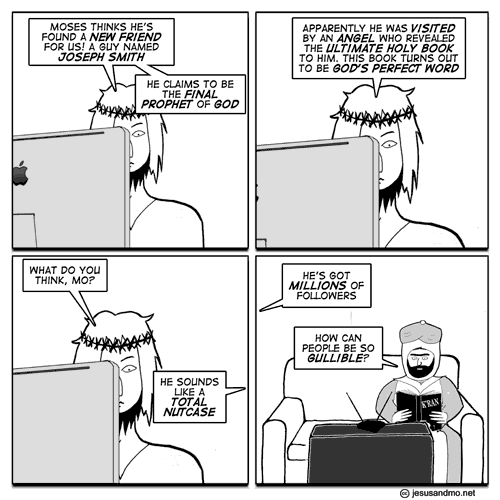 ITEM: The last three Jesus and Mo's have been about the founder of Mormonism Joseph Smith, a thrice convicted fraudster who found the con that would stick: Religion. Related: I posted this on prominent atheist Sam Harris' Facebook page because we're tight. He's researching using increased funding for education so that people could, presumably, rely on will power and reason to solve their problems instead of prayer. I wrote about possible detours and problems with that approach.

Hedges says its time to abandon the Dems. (But replace them with what...?) I have a plan.

Hedges thinks its time to abandon the Dems (With what? I have a devious plan...) Related: This Paul Rosenberg argument has to be debunked.
Posted by Philip Shropshire at 5:33 PM 0 comments

How did I miss this: Dexter motion comics at Youtube illustrated by Heavyweights. 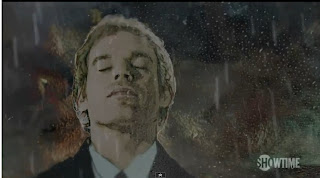 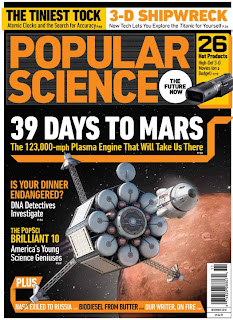 e this story about a cutting edge engine that can get you to Mars in 39 days and a possible breathable atmosphere on the Saturn moon of Rhea...well, I think we can all start making plans. Um, how breathable is that air on Rhea? Wouldn't you get irradiated? Could you live a couple of hours?
Posted by Philip Shropshire at 5:17 PM 0 comments

I too am Wikileaks. (Link for complete list of Wikileaks Mirror Sites.)

Here is the link to the complete list (ever evolving) of Wikileaks mirror sites:

In case you think you should know things...

Something that I left on Sam Harris' wall...(Prominent Atheist.)

Well, I just wanted to add something to this, although it might mean that you'll have to do research into several different topics but there it is...

1. Educational attainment has very little to do with the development of intelligence. American schools (public schools anyway) were designed to develop people who could fit in comfortably at turn of the century (1900s) factories. In other words, public schools for the poor are there to give you minimal critical thinking skills, if any, and to turn out unthinking uncontemplative drones who can only follow memorized orders. I actually think this is the job they still do very well except for the unfortunate fact that this is 2010. This is also a theory of education that isn't taught very well, even amongst the very well educated for reasons I guess are very self serving. You might find these writers and thinkers very interesting if you wanted to research this further:

AS kind of an aside, as to how you could equip the populace with the critical thinking skills to see through religious bullshit, you might want to talk to Nicholas Negroponte. The last time I saw him on the television he said something about not emulating the very regimented and in all probability creativity killing South Korean educational system. Frankly, he sounded a lot like those aforementioned writers. Give a curious kid a laptop and let him roll I suppose would be his theory on intelligence creation. He did give the example of the story about a kid who taught himself how to read and write using his laptop...Related: Very good Youtube video. http://www.youtube.com/watch?v=zDZFcDGpL4U

2. Right now we're kind of watching the dismantling of American public education by rapacious privatization czars. The truth of the matter is that American public education is woefully underfunded and the United States is alone, I believe, in the industrialized world of not funding their education at the national level, as opposed to a patchwork of county and state funding which produces wildly varying results between say Alabama and Washington State. So, if you doubled the education budget you might find yourself funding a lot of Catholic or religious schools or that new private for profit diploma school that Rupert Murdoch just bought.

3. And this is related to two and has to do with the politics of it all: Both parties are in the pockets of private interests that want to destroy or seriously maim public education. And its not because they want to help kids. They see education as a kind of profit center. Its also aimed at destroying the only unions left: teachers unions where its almost impossible to ship your job overseas. And no I don't know why Barack Obama and Arne Duncan are pursuing yet another way to kick the trad dem party base in the teeth. With the republicans that's always been the long term goal: third world wages for the majority of Americans.

The best resource on this is Not waiting for Superman:

4. I tell you I'm qualified to be the fifth or sixth Horseman, who happens to be African American. If only one of the Terrific Four would recognize my gifts...Could have a book out within six months with a 5000 dollar advance. Really I could...
Posted by Philip Shropshire at 2:08 AM 0 comments

My Sick and Unhealthy Obsession with those Very Healthy Female MMA Fighters.

I may have a fetish for women martial artists: 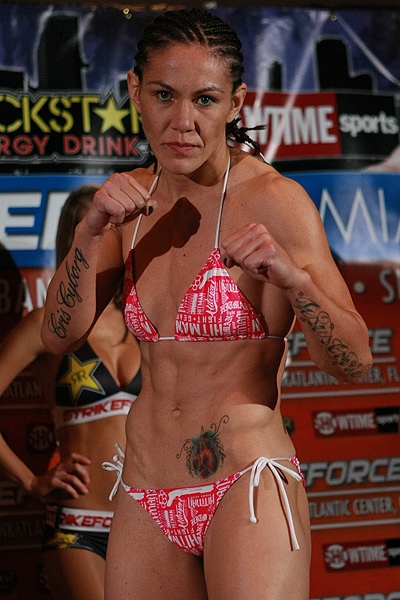 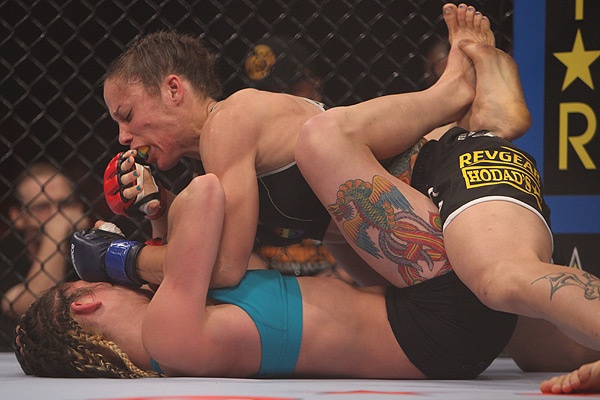 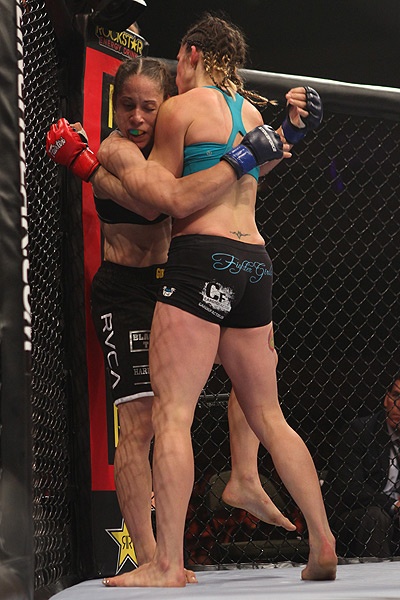 Ooooh Pin me. Yet I would appreciate it if you would not use your brazilian ju jitsu skills to break all of my limbs. However, for all you violent and dangerous and mean spirited lady fighters in the Greater Tri State Pittsburgh area may I suggest myself as a training partner? You never know when a lady in the 115 to 135 pound weight class may find herself in the Octagon with a 280 pound black man. I think this training would be realistic. I could get on "top", or "bottom". We could work the half guard, full guard, both of us slathered with baby oil. Sounds fair...

Posted by Philip Shropshire at 1:37 AM 0 comments