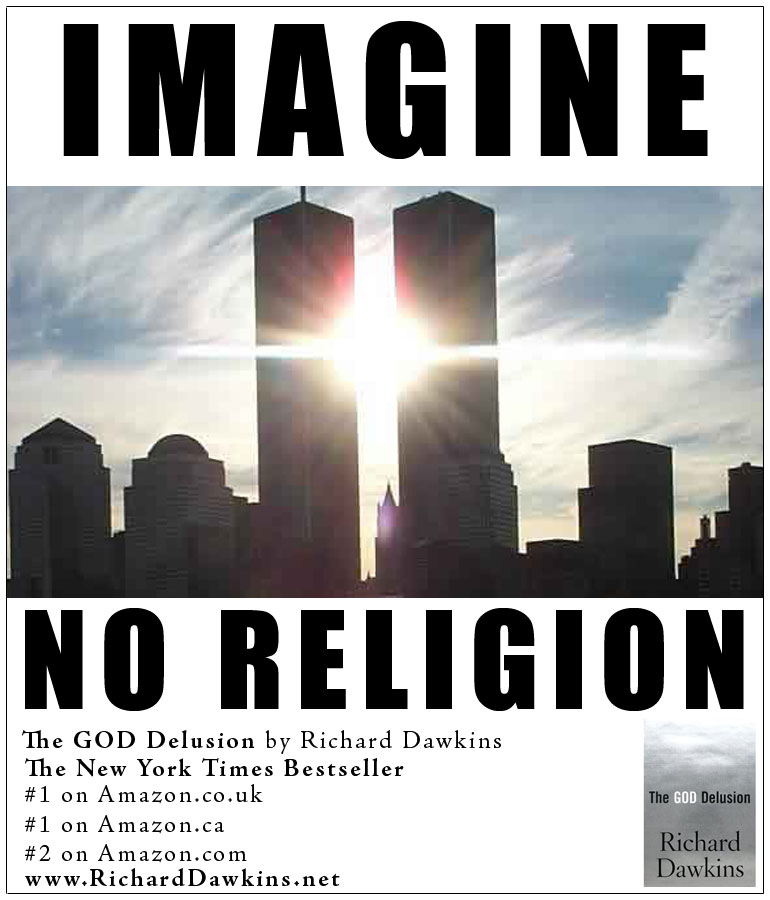 Okay, if you're into Richard Dawkins atheist mania (and who isn't?) then you need to check out this Time magazine article, which I could judge to be no more than a draw and I'm biased, this speech by Dawkins at a college at Lynchburg where the Falwell followers tried to heckle him and this short bit on Youtube.

I have also now seen both Richard Dawkins episodes of South Park and read the aforementioned Time.com debate. I wanted to comment on one aspect that appeared in both venues, and also even in the Wired article which I have yet to comment on. And that's this idea that telling people that their god given delusions are, well, delusions, isn't very nice. Or as it was so eloquently put in South Park, and I'm going to paraphrase from memory: "being a dick about it".

Well, it should be said that sensible Brights like myself were quite okay to live and let live...until it became clear that religious forces won't allow us to do this. It started for me with this overall realization that when fundamentalist Christians and fundamentalist Moslems get their hands on nukes then we're probably all dead. It started showing up specifically when these backward delusions started getting in the way of science policy--everything from the teaching of evolution to stem cell research. I'm okay with you believing that Santa Claus has a wonderful place for you after death full of virgins and hellish eternal torment for your enemies/people that don't agree with you (how Christian) but not if it interferes with the greater good in the here and the now. I think that the major religions are life hating and as Bertrand Russell has stated they are unworthy of strong independent men and women, as opposed to childlike sheep. And, frankly, while I'm uncomfortable with puncturing the delusions of believers, if rudeness is necessary to save the world then a dick shall I be...as Funky Dung can certainly attest to.

Posted by Philip Shropshire at 10:29 PM No comments:

Give Me Money! That's What I Want!

I would love to do this full time, but I need money and donations to do that. So, if you have spare grand or two to donate it would be appreciated Mr. Gates.

Posted by Philip Shropshire at 8:46 PM No comments: